TV talk about people who walk 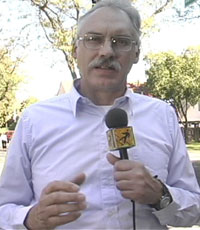 John Z Wetmore was born in a neighborhood in Minnesota with 6-foot-wide sidewalks. After his family moved to Illinois, starting in kindergarten he walked to school along 5-foot-wide sidewalks. When he was in sixth grade, his family moved to a suburban neighborhood in Maryland ... half a mile from the nearest sidewalk! Thirty years later, his family celebrated when the County finally built a sidewalk along their street.

Mr. Wetmore received a B.A. with High Honors from Princeton University and an M.A. and M. Phil. in economics from Yale University. He is an independent television producer, specializing in documentaries when he isn't working on Perils For Pedestrians.