TV talk about people who walk

Transportation Right-of-Way Use by Pedestrians

Because they have to connect places, transportation right-of-ways are long and continuous. This is true whether you are moving cars, trains, boats, natural gas, electricity, or pedestrians.

Since pedestrians need the same sort of long, continuous right-of-way that other transportation modes use, there can be opportunities for pedestrians to share the right-of-way (ROW) by including a paved trail.

Doubling up use on an existing ROW is usually easier and cheaper than creating a new pedestrian ROW from scratch, and therefore can be a wise use of scarce resources when pedestrian funding is limited.

There are many examples where pedestrians use ROWs created for other purposes.

Almost every ROW either runs between population centers or leads to a population center. And they go past many communities and places of interest. That makes them natural transportation routes for pedestrians, connecting people to destinations.

Some ROWs are flat, like canals, levees, and railroads. Others, like power lines, go up and down hills rather than around them. But even power line ROWs have relatively few stretches where insurmountable cliffs block any possibility for trail use. If part of a ROW is not suitable for trails, you just don't use that part.

Some ROWs are shady or could be shady with a bit of tree planting. Levees and power lines have few trees, so trails will be in full sun. However, the ROW probably goes close to community parks or other places suitable for shady rest stops with benches or picnic tables.

Some ROWs are not owned by the company, but are just an easement limited to one use. The need for additional land rights adds difficulty and expense to putting trails along those routes. However, if it goes someplace pedestrians want to go, and there are no convenient alternatives, it might still be easier to acquire additional rights for the existing corridor than to create an entirely new ROW from scratch. 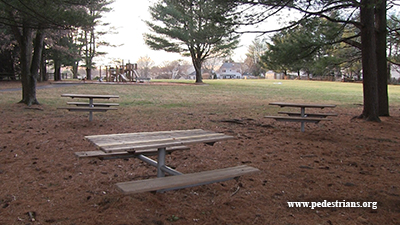 A small neighborhood park provides a shady spot to rest and eat next to a pipeline ROW trail in Olney, Maryland.

There are some areas of concern when putting trails in a ROW.

How does a trail benefit a utility company?

Simply put, the main obstacle to building trails along power lines is the attitude of the utility company. See A Simple Request for a Trail for one example.

If the utility company sees the public as friends and neighbors, and it wants its ROW to be a positive amenity for the surrounding community, it will find a way to allow trails to be built. It will take full advantage of its state's Recreational Use Statute. It will reach out to local governments looking for opportunities to build trails along the ROWs, and actively negotiate agreements that protect and benefit all sides. Trail inclusion becomes the default condition, instead of being the rare exception.

If the utility company sees the public as a threat, or it just doesn't care about the surrounding community, it will find an endless list of objections to building any trail. Opportunities will be squandered. Sadly, its ROWs will be as attractive as living next to a state prison, with nothing but No Trespassing signs to greet you.

Opportunities For The Future

Right-Of-Ways are precious resources for society. They are difficult to assemble, involving substantial expense, disruption, and condemnation through eminent domain. So it only makes sense to get the most out of the ones we have. Fortunately, paved trails for pedestrians are compatible with ROWs for other uses. Where trails have been built, they have provided valuable transportation and recreation opportunities for local residents and visitors alike. The existing examples can inspire more trails to be built in the future, so that the pedestrian network becomes as extensive as the entire transportation and utility network.